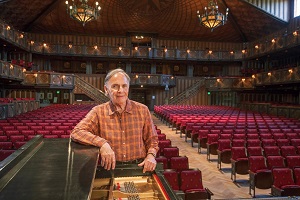 "For more than 40 years, James Dick has been quietly building a renowned musical mecca in Central Texas." The article, Note by Note, in the November/December 2017 issue of the Alcalde, official publication of the Texas Exes, goes on to say, "the original six acres that Dick bought have slowly grown into over 200 verdant acres. And then, of course, is the pièce de résistance: A grand, 1,000-seat concert hall with a steepled ceiling...

"Dick, BM '63, Life Member, Distinguished Alumnus, was raised on a farm in Kansas... After graduating from UT in 1963, and spending two Fulbright Fellowships at the Royal Academy of Music in London, Dick was beginning his concert career in full, picking up international music awards along the way... 'But I'd always loved to teach,' Dick says, 'I thought maybe there will be someplace we can find where we can invite some pianists to come.'"

Then Texas arts patron Ima Hogg, 1901, UT Distinguished Alumna, brought Dick to visit Round Top...and the story unfolds from there.